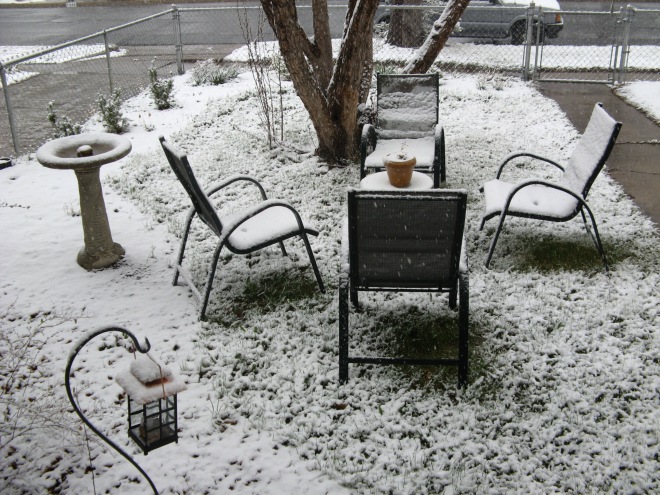 Oh, and the best part: A predicted low tonight of 20 degrees.

In the land of Garrison Keillor, people are known to respond to nearly every cataclysm by saying, “It could be worse.”

Crazy, how that puts things in perspective.

And, on June 6 in the gardenhood, it turned out to be true. Wild as the storm was on and all around the flat corner lot, not so far away, it was far more dangerous. Torrents of rain filled the streets and swept the hail into drifts. This photo was published by a local television station, KRDO. 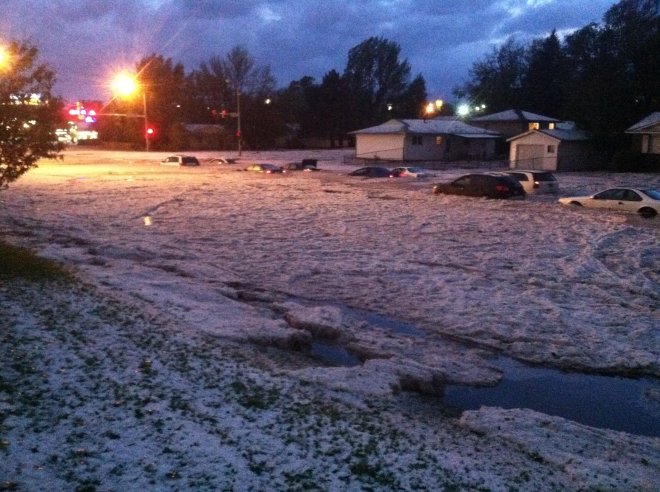 It’s hard to imagine any part of a garden surviving this.

Friends living just blocks away had everything — flowers, vegetables, tree fruits — destroyed. Over the next few days, I was fortunate to run into or hear from quite a few. I say fortunate because each one of these folks was carrying on, replanting, cleaning up, treating survivors for trauma. Gardeners are an intrepid and inspiring lot.

My own first steps of the journey into the aftermath gave me a big surprise. As I photographed the damage, the undamaged and the broken but valiant became more important, more fascinating. I had expected to feel grim and to summon my stoicism, but I went back indoors to make breakfast feeling a measure of delight. Most things would pull through. Lily buds remained at the tips of battered stems. The Meidiland rose never blinked. Hollyhocks leaves were shell-shocked, but they held tight to their buds. There will eventually be blossoms and perfume through the garden. 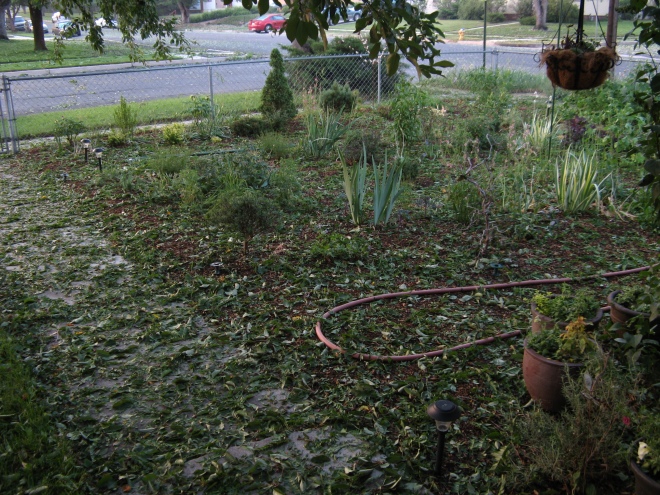 View from the front porch, the morning after the storm.

Three days before the storm, Crambe cordifolia and Walkers Low catmint had been subtly charming.

Nearly unrecognizable the day after. 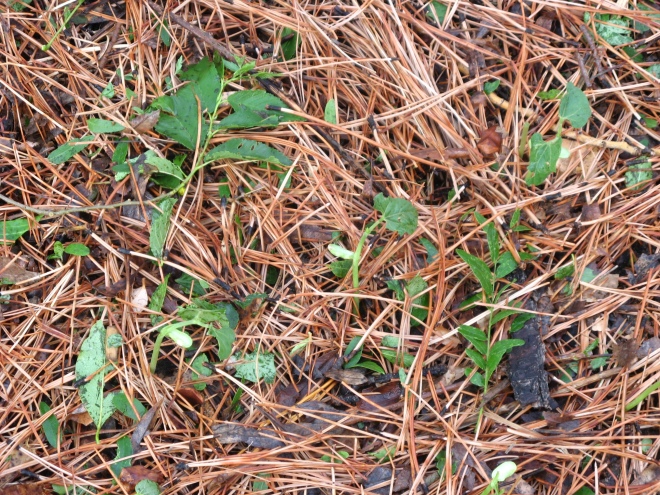 More than half of three varieties of heirloom and native beans were reduced to stalks, but it was early enough for these short-season plants to reorder seed. 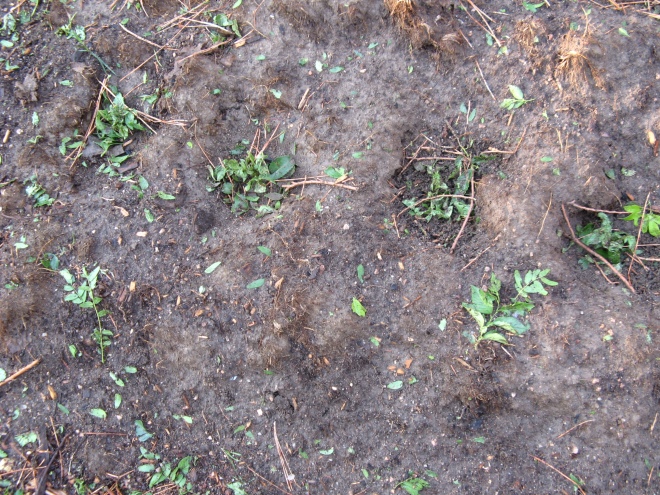 The “Julia Child” tomato was reduced to a stalk and one leaf. “Oh, well,” rings her soprano voice, “These things happen. Carry on!” 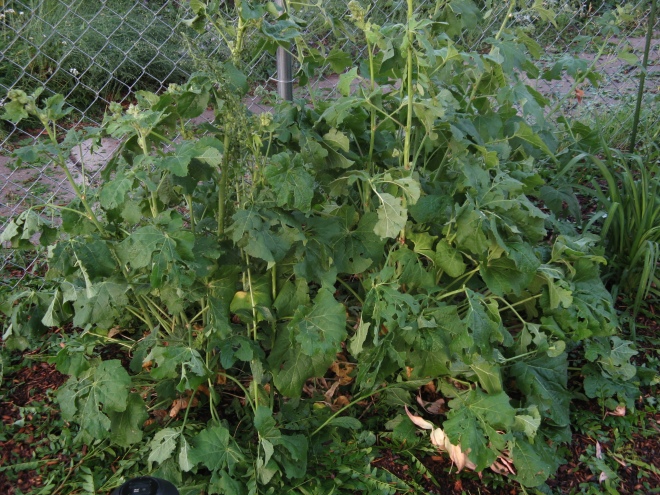 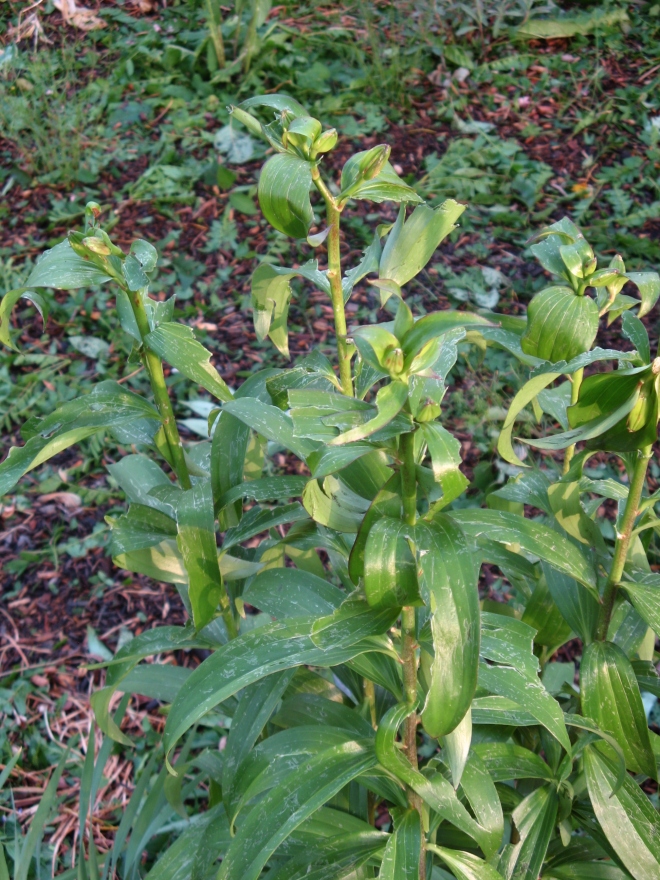 Most Oriental lily buds stayed put, though a few are well-dinged. 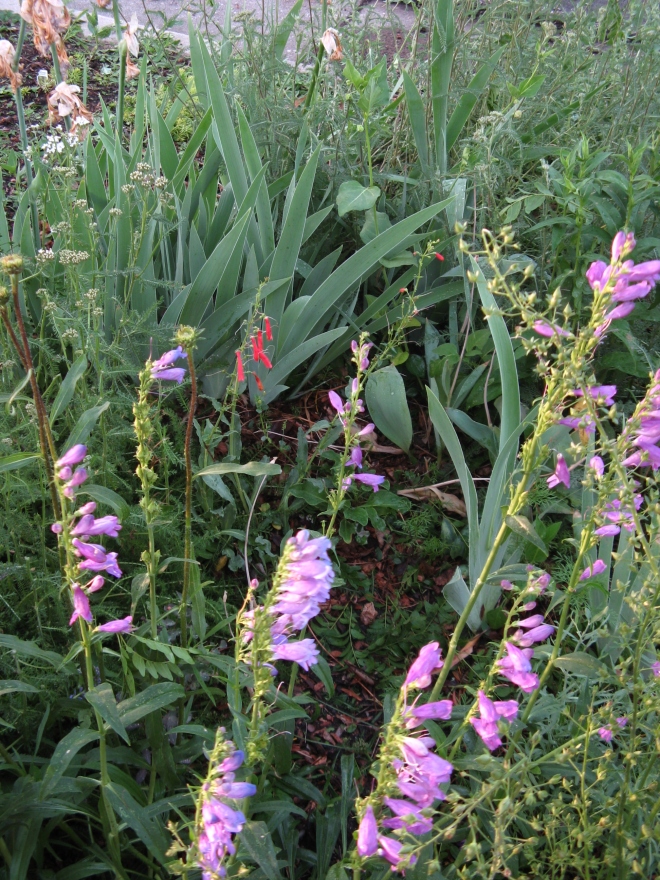 Moonshine yarrow was tipsy, but sparkling.

It was permissable, even wise, to let all the debris, the riddled leaves, the bent stems, stay as they were through Thursday and Friday while I worked, rested, and rallied for clean-up.

Saturday morning, before temperatures flirted with 90, I filled my mulching wheelbarrow to its 8 cubic foot capacity three times. This from my 1,000 square foot front garden, alone. And that didn’t get it pristinely clean. Not by a long shot. 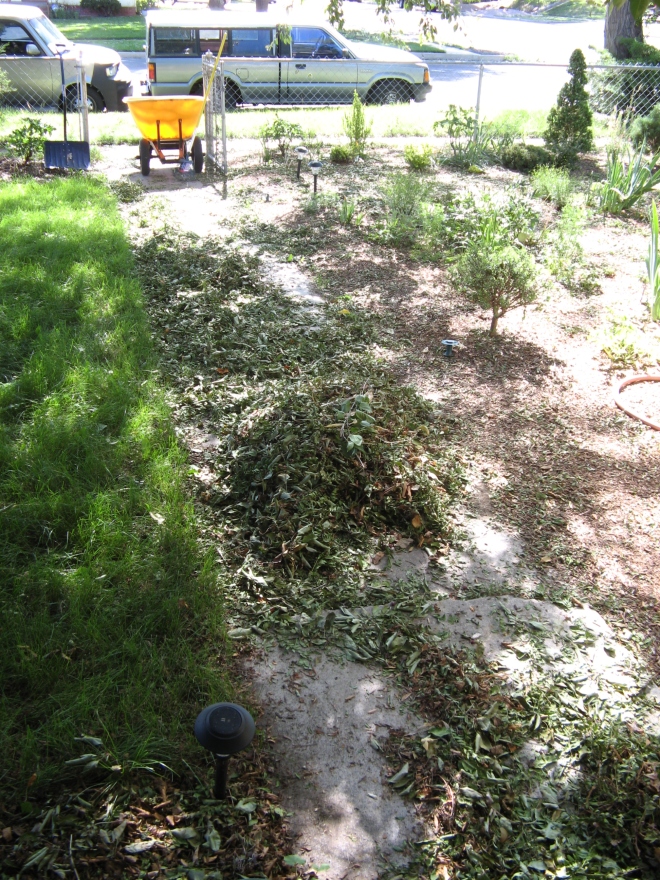 Bless the honey locust trees and whoever planted them in the parking median in front of the  house. Although their leaves rained on the garden, their high and airy crowns minimized the damage.

Reminded by an email from Larry Stebbins, I sprayed the remaining foliage with seaweed extract, and the healing has begun. 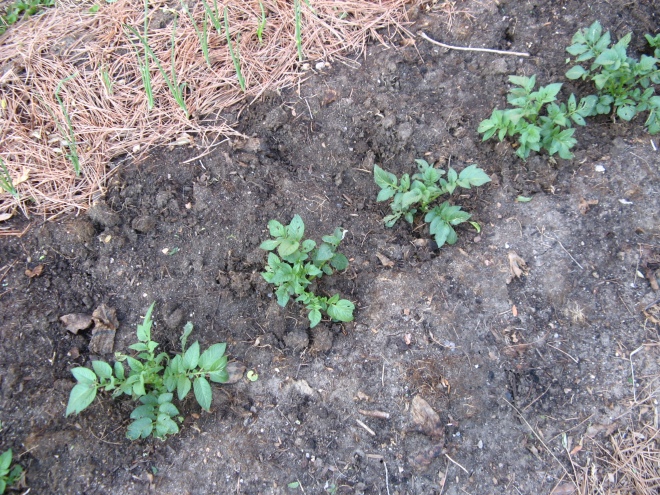 The wonderful spuds have grown so much, I’ve started to hill them. 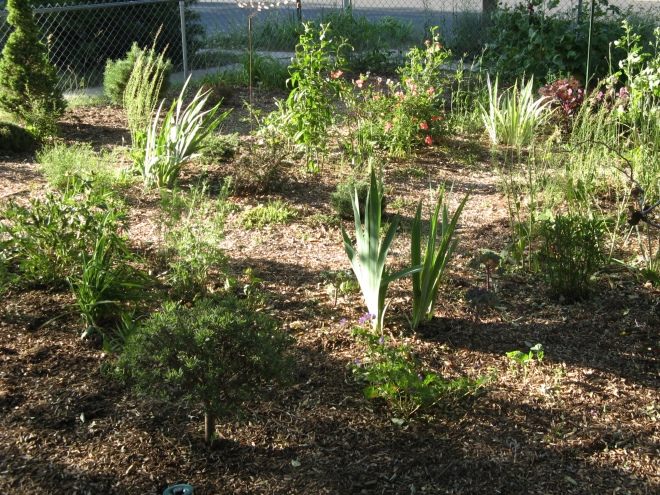 The garden is happy, breezy, and full of sun. So’s the gardener.

The first 2012 seeds arrived on Thursday last week. They were pricey, but so worth it. Those little nuggets of promise were locally grown which, among other attributes, made them irresistible. I love that my purchase, in some small way, connects me with and helps preserve the Hobbs Family Farm in Avondale, Colorado. Knowing that these seeds were grown in soil and conditions similar to those here, on the flat corner lot, gives me an exciting expectation of success.

The packets, holding four kinds of beans and Hopi Orange Squash, went from brown envelope to shoe box in a chilly closet where they continue to dream, as do I, of warming soil and fulfilled potential.

I chose heirloom and traditional varieties, yes, for the greater good, as a way to keep real foods alive and adapting to our changing world. I also chose them so that I might touch the history of this place and better feel my own roots mingle with those of the people who were nourished here for many centuries. I, too, will participate, tasting what they tasted, blessing what they blessed, saving seeds for whomever comes next.

This reaching down and backward gives me strength, fuels my sense of wonder and belonging, keeps me moving forward.

When I came across traditional celebrations based on the ancient lunar calendar of Ireland, it was like striking a tuning fork, shifting my perspective on the seasons and how to relate to them. We all know about solstices and equinoxes, and most of us grew up with those events marking the beginning of their respective seasons. We also grew up celebrating May Day and Hallowe’en, but with little understanding why.

The Old Ones from stephanhoglundphotography.com

From the very old days, however, each season begins on a day that rises between an equinox and a solstice. Think of it: Summer beginning on May Day, Autumn on the first of August, and Winter on the day after Halloween. That puts us, now, at the first day of Spring.

Although winter weather isn’t over, days are stretching and light and warmth returning. It’s truly a time to celebrate and look for the earliest signs of new life. Gardeners do this instinctively. Even when the garden is buried in snow or hunkered under heaps of leaves, trees and birds send signals. In the gardenhood, house finches practice their reckless mating trills, chickadees twee-dee, and the willows along Shooks Run blaze a brighter gold.

This year, when Punxutawney Phil pokes out his prognosticating head, dance a jig. It’s spring. No matter what his peepers see, the circling earth on her tipped axis, gives us every reason to expect a positive outcome, and that is the very definition of hope.

This is the first anniversary of Gardenhood. Thanks, so much, for coming along on the journey.

Unauthorized use and/or duplication of this material without express and written permission from this site’s author is strictly prohibited. Excerpts and links may be used, provided that full and clear credit is given to Cheryl Conklin and Gardenhood with appropriate and specific direction to the original content.